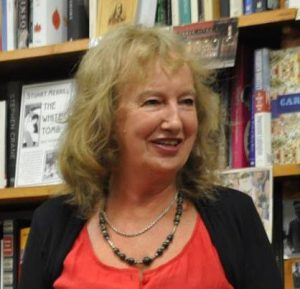 The life source of any U3A is the richness and diversity of the courses it offers and the enthusiasm of the tutors offering them. When the group planning an Eltham U3A and the existing Nillumbik U3A joined forces, Lyn was elected onto the new Committee. Her area of responsibility on that committee was Course Coordinator; a position she still holds.

From the outset Lyn has also thrown herself into tutoring. Her expertise and passion for the written word and the Classics are obvious in the courses she has offered continually from Term 4 2012. Beginning with Creative writing she soon returned to her love of the Classics and since 2013 has conducted many courses in this discipline. A few examples of her courses are; The Peace plays of Aristophanes, The Iliad of Homer, and The Odyssey by Homer.

Lyn was born in Thornbury and lived there until she was 18. Primary school was spent at Wales St and Penders Grove. Years 7-11 were spent at Preston Girls where on completion of her Leaving Certificate she was offered a teaching bursary. Being very young she declined the offer and went to work at AMP.

However the lure of further study beckoned and in the early 1980’s Lyn went back to evening school to complete Year 12. She began an Arts degree in 1984 at Monash, was offered honours and decided on English and Classics which she completed in 1987. She was awarded a postgraduate research award and began a Master’s degree which was converted to a PHD in Classics which was competed in 1994. In 1996 a book based on Lyn’s PHD studies, ‘Sappho’s Sweetbitter Songs’, was published by Routledge. Her second collection of poetry was also published the same year.

After 5 years lecturing at James Cook University in Cairns the heat and humidity of the far north got too much and Lyn and her new husband Chris moved to Brisbane. In late 2002 they moved back to Melbourne when Lyn’s father became very ill. They moved to John St. in 2007 where they were owner building a house that they finished in 2009.

Lyn now has 5 grandchildren and 1 great-grandchild. Her passions continue to be writing, particularly poetry, education and philosophy. Her other passion is her concern about sustainability and the environment. Her home was opened for Sustainable House Day in 2012 and is solar powered, independent for water and extremely efficient. She is also a member of the Victorian Greens and stood as a candidate for the council elections in 2012.