At our request, Lilia Deschamps submitted the following in April 2020. 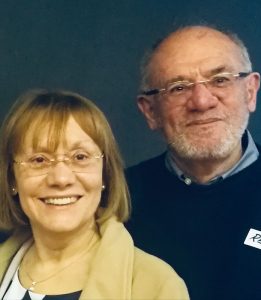 We were both born in Mexico, me (Lilia) in Mexico City and Renato next to the Gulf of Mexico in the Atlantic Ocean.

I used to spend most of my holidays at Renato’s little native town, Tuxpan, which is on the side of a beautiful river, while Renato would visit Mexico City due to his grandfather’s business. In Tuxpan, my uncle was the town doctor and everyone there knew everyone else there, so our families’ histories intertwined. I loved the beach, the ocean, playing volleyball and running around while Renato spent more time with his cars and his meccano. He also liked the ocean and boating along the river.

Later on in life, we married and decided to immigrate to Australia. We arrived in Melbourne in 1988 with four suitcases and two lovely little daughters and we all became Australians. We loved the ocean and open spaces and the people and always looked for a place near a river or the sea… I guess we have it in our genes.

I did my primary, secondary and high school education in Mexico City, Bachelor in Physics and Master’s in Atmospheric Sciences at the Universidad Nacional Autónoma de México (UNAM), and my PhD in Philosophy (Atmospheric Sciences) at the University of Melbourne. Renato did his primary schooling in Tuxpan, his secondary and high school in Mexico City and his Bachelor of Engineering at the UNAM. Once, while walking, he told me that I was his physics tutor in secondary school … I don’t remember.

I loved, and still love, science – I started doing experiments at home during my secondary schooling and, several times, I blew up our home electricity! I remember doing my homework fast in order to go out to play, but later on at university things were more difficult and I spent, like any university student, hours and hours studying my subjects. Renato was more into technology with his fancy sound system. He was, and remains, good at languages and music. He loved thermodynamics and I just passed it.

When I was in high school, I started tutoring. At university, I was editing science books and, later, tutoring and lecturing at the Science Faculty until finally I got a foot into scientific research as a research assistant at the Science Faculty, then as a scientific researcher at the Geophysics Institute and then, two years later, I moved to the Atmospheric Research Centre at the UNAM.

In Australia, I continued in Atmospheric Research at the Cooperative Research Centre for Southern Hemisphere Meteorology and then at the Bureau of Meteorology. My research was on the Antarctic Ozone Hole forecast and evolution and on Ultraviolet Radiation forecast (you may have seen it on the media as UV Index forecast or UV Alert). I loved it. I used to work with people across institutions and it was research highly regarded in the public arena.

In Mexico, Renato used to work in the banking industry and then as a Senior Lecturer on Computer Science at the Engineering Faculty. When we got to Australia he started at the ANZ Bank and made his way from the Computer Help Desk all the way up to Regional Manager of Computer Services Support of Victoria, Tasmania and South Australia. His team loved him for the way he pushed them to do their best and how he cared about them. He was known as ‘The Legend‘.

At the centre of my life are my family, my grandsons, daughters, sons-in-law and Renato. I love reading, painting, Tai Chi and having a coffee. Renato likes talking to people, languages and computer stuff. We both love walking, touring around, our small brunch treats and enjoy our time at home, at the moment more than ever.

We moved to Greensborough in 2000, love the fresh air, the trees, the birds, the river, the library, the coffee shops, the peacefulness and the people. It is close to town but far way enough to give you that sense of being out of the city.

Renato and I joined U3A because we wanted to continue being physically and mentally active and we wanted to start new networks and friendships. We became tutors almost by accident. Renato was asked about becoming a Spanish tutor by Eve Scopes and he said “yes” then commenced tutoring in 2014.

In 2017, our Tai Chi group lost its tutor so we started a Practise Group and then I decided to join Tai Chi (TCA) Instructor Workshops as I love this art form which embraces mind, body and spirit and also because I wanted to be of more help to the Practise Group.

We are always learning something new from the other members of the U3A. It is great to be able to give a bit of our time back to the community. It is our small contribution, we love it and we have fun doing it.