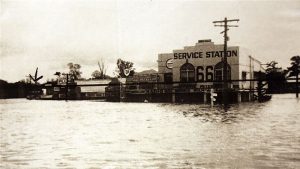 The steady 'drumming of an army' of rain drops on the tin roof eased, providing a welcome respite for faint moonbeams to reveal the murky swirling waters below. There were endless eddies and debris combined with angry brown mud.

Just a few days earlier, pastures had beckoned and cattle grazed peacefully under blue skies, beside a tranquil river leisurely flowing behind our Fawcett Street home in Kyogle. Each day after school the paddocks, river bank and trees became our playground. The grazing cattle were imagined as wild animals as we ventured out, armed with our cats, dogs and wooden swords. The scene was punctuated each day by my mother shouting from the porch "The Search", which was a signal for us to return and listen in bated breath to the radio series The Search for the Golden Boomerang.

Our family house had been purchased on the basis that it was flood free. As an added precaution, it had been built on high stilts. Despite the cyclonic rain on that fateful day, it was never considered possible that our house would be flooded. As the floodwaters entered our backyard, I imagined myself as fisherman and dangled my fishing line in the brown waters below. However the rising waters were soon inching their way up our back steps so we evacuated to neighbours on higher ground. My father stayed on to protect our furniture and effects.

That night we stood on the verandah peering out over the murky waters watching my father swimming around in the house placing items on higher vantage points in a futile attempt to avoid the ever rising floodwaters. We watched in relief as he finally gave up to wearily swim out through the bedroom window for the bank and safety at last. Fully clothed, cold, and exhausted, he slowly hauled himself up onto the bank to join us, just in time to see our house disappear under the mighty waters of the Richmond river.

In other parts of town, tragedies were occurring as people lost their lives as homes were swept away. A mother and her two children drowned when a small rescue boat capsized in waves on Fawcett’s Plain. Others were caught in floodwaters and washed away but miraculously survived by clinging to trees until rescuers arrived. Feats of great courage and heroism were later recognised and members of the 1st Kyogle Girl Guide Company all received a gold bracelet as recipients of an international award for their help in the clean-up.

I can still remember that smell from the flood and the endless mud. There were pieces of corrugated iron from roofs around and it was soon turned to good use in makeshift canoes, folded over and sealed both ends with tar, to deliver milk and supplies. I remember search parties each morning looking for bodies and everyone helping one another. There was the drone of the old DC3 dropping supplies to a community isolated by the floodwaters.

My parents decided to leave Kyogle not long after.