We hope that many classes will be able to re-start at the beginning of Term 3 but this will depend on circumstances, availability of venues, how the tutor feels about things, etc.

None of the Council venues are currently open, nor do they yet have dates, or even timeframes, for re-opening. Even when they do re-open, social distancing will mean that their capacities will be much reduced so we will need to consider the rules for numbers attending plus some classes will need to be moved in order to be viable. For example, we estimate that the capacity of the Old Eltham Courthouse will be reduced from 30 to 13. Suitable cleaning regimes will also need to be put in place and rules re sanitiser, coffee mugs, etc established. The Council is not yet ready to discuss any of these subjects. When they are, we can start planning.

Just because we are not holding any physical get-togethers, does not mean that all of our activities have ceased. Au contraire. Of the 69 classes from Term 1 that were planning to continue in Term 2:

This means that around half of our classes are continuing in one form or another.

Dianne (our Course Coordinator) and I (as President) would like to thank all the tutors who have found ways to keep their classes going. For those new to Zoom, we would like to congratulate you for taking the plunge. And we much appreciate the efforts of our central Zoom Support Team of Jan Taylor, Gillian Essex and Rob Gardner.

Most of the tutors, some with some help, are finding the technology manageable. Levels of participation vary but most of the participants appear to be finding the experience interesting.

Some, but only a minority, of the classes using teleconferencing (Zoom) are also holding email discussions with those participants who don't want to Zoom.

We currently have two paid Zoom licences which have been made available to our classes. As shown in the calendar on our website, 13 classes have taken advantage of this thus far.

In many cases, the activity comprises some sort of weekly task, challenge, puzzle or homework set by the tutor.

In other cases, the tutor is providing links to relevant online websites or videos.

For one class, the tutor is continuing to write presentations and circulate them.

Finally, some of the Walking Group are walking in pairs. 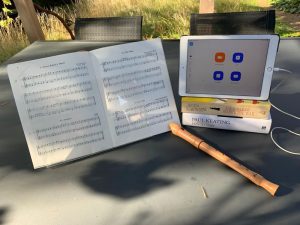 Gillian Essex has written in to say that the Recorder Group recently had their first videoconferencing meeting using Zoom. Because of the time delay, they couldn’t all play together at the same time so they chose reasonably simple tunes in unison or two part harmony and those who were confident enough to do so took it in turns to play 'the lead' while the others played along with their microphones muted. They all agreed that it was good practice for counting in, keeping time, holding a part by ourselves and overcoming nerves from playing solo while others are listening. They also agreed that it was much more satisfying than practising individually by themselves. The picture is of Gillian Essex’s setup in her garden, where she is using a recipe book stand re-purposed as a music stand.

At one of their recent videoconferencing classes, all the participants agreed to wear hats. Noel Butterfield wrote up the results thus.

"The inaugural 'Fashions on the Field' was held on Wednesday, 28th April as part of the 'Stratford upon Avon' cup week celebrations. A fabulous array of headgear was on display: Jan McKenzie was resplendent in something that looked like it was pop riveted to her left ear, diminutive and chic; Valerie Pulman looked very sporty in her Celtic jockey's cap; Meredith (our resident costumeer) looked peachy in her blue floppy creation; Sandra, our debutante, was reminiscent of Natalie Wood in her tilt-back coquettish piece (a real head-turner); another broadbanner was chosen by Pam Jenkins (sponsored by Slip, Slap and Slop); Linda Browne chose a more modest, basin style that was totally inappropriate for oppressive English Summers; Sue chose an elegant little red number and looked downright peachy; Chris looked the part in his Kenny Rogers ensemble; Sir Roger (long time patron of this event) looked resplendent in his customary brogue; Ken scratched due to 'pulling a heart muscle'; and John scratched due to suspected Scottish head lice. But Carol was unanimously judged 'best afield' with her bullet-riddled Richard 2 crown, which would not look out of place in a souvenir shop in Glenrowan. Given these trying times, Carol epitomised the saying, 'necessity (really) is the mother of invention'. Or, in the words of old Mr Grace from Are You Being Served, 'You've all done very well.'"

Brian McLean, the leader of our Hurstbridge Discussion Group on Current Affairs, has been circulating his group with suggested topics for them to think about. Here are two of the current topics.

"There are more important things than living" said Texas Lt. Gov. Dan Patrick (R) when calling for the re-opening of his state and the country in an interview on Fox News. Texas has a population of around 29 million people and the coronavirus has infected around 23,000 Texans, leading to around 600 deaths. Australia has a similar population, with around 7,000 coronavirus infections, leading to around 80 deaths. The debate/discussion in Australia about when and how to begin re-opening the economy, while still protecting the health of those most vulnerable, is going to be a more complex, layered and nuanced one than is currently being played out in the more partisan political climate of the USA. Discussion: in purely Machiavellian terms, have the ends justified the means in dealing with coronavirus in Texas and Australia?

In The Age on 22nd April, Caitlyn Fitzsimmons asked "How do we repay the young?". She went on to say "It is true the lockdown is disproportionately hurting young people, while older people are more vulnerable to Covid-19" and then listed the economic and psychological impacts of the lockdown on the younger demographic. Discussion: should serious tax reform, that includes a hard look at tax policies that disproportionately benefit our demographic, be part of our responsibilities to the young? Is it enough to hope for a return to the old ideologies and norms that governed our economy pre Covid-19?

Andrew has also been collating various weird news stories over the ages. For example, Virginia Beach, Virginia, 1981. A burglar entered a woman’s home while she was asleep. He went to her bedroom and forcibly covered her from head to foot with vanilla and chocolate cake frosting. When she objected, he said that she should have known this would happen if she left her front door unlocked!

Our Painting and Drawing Group: knocked down and getting up again

Leanne Ipsen has written in: "A week or so again, six of our big painted letters on the Research Pre-school fence were vandalised, broken and ripped from their position. Thanks to an alert parent, they were collected and stored. We have now collected them (thanks to John Coates as I have fractured my ankle), repaired them (thanks to Dennis Smedley), re-painted them and are about to restore them to their rightful position (thanks to Dennis's son in law).

"Our group is continuing to paint privately but share work co-operatively. As a testament to resilience, Kath Keppell, our oldest member, after major skin graft surgery, has begun painting again and has just sold a painting!"

The current eleven members of the Collaborated Writing Group are continuing despite isolation. Each week, there is a suggested topic and the resultant pieces are circulated by email. Each writer is encouraged to send in critiques on that day and this is proving both valuable and positive for both the critic and the writer. They hope to continue in this manner until normal classes return.

A number of their artists are continuing to draw zentangles, mandalas and other doodles. See their blog.